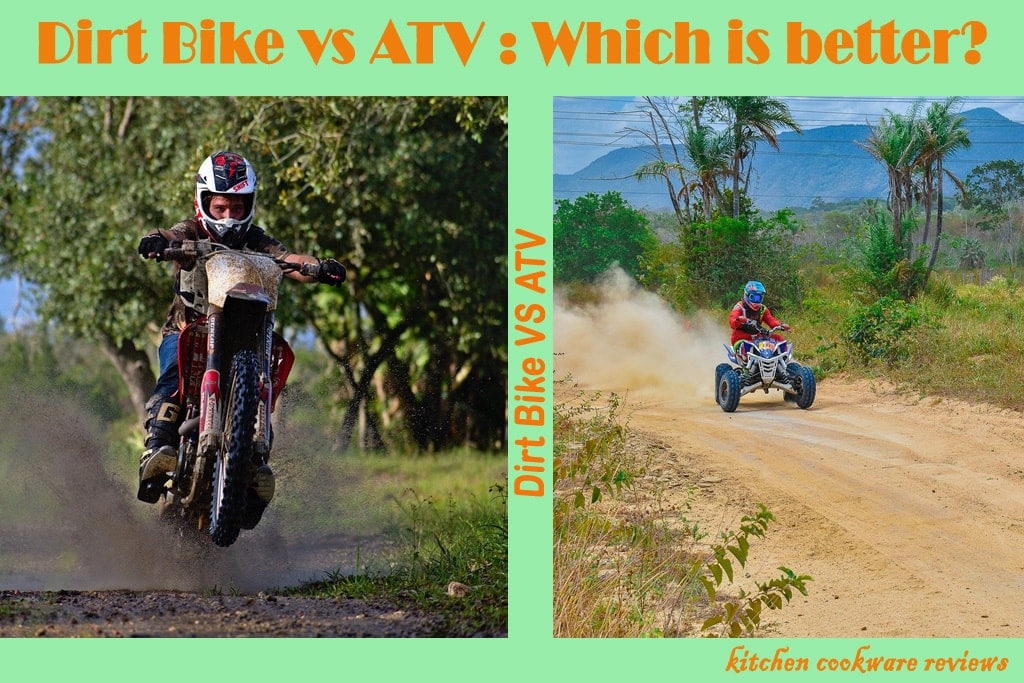 For so many years there has been a big debate on which is the best motorsport for off-roading. Different people have diverse reasons to choose what is right for them. Which is better, the dirt bike or the ATVs?

Dirt bikes are superior at racing due to their high speeds compared to ATVs that have slower speeds. Any dirt bike is not limited to race in congested forests or narrower spaces, unlike ATVs. However, ATVs have to offer more comfort, utility, and safer driving when you are a beginner.

ATVs have a different design with that of a dirt bike. Many reasons make people choose one over the other. Besides, the two “machines” are suitable for different purposes and terrains.

In our article, we focus on various aspects, such as their functionality, speed, weight, safety, and cost, to help you make the best decision.

The below table will give you a quick overview and understanding of the key differences between the dirt bikes and ATVs.

ATVs are more functional machines; hence they have a smooth suspension. It gives it more strength and comfort while driving it. Dirt Bikes, on the other hand, offers a jagged suspension hence taking away your comfort.

Unlike dirt bikes, ATVs are at another level, whereby you do not have to stand while driving. Besides, the seat is positioned and designed to give more relaxation on all terrains. Dirt bikes can be uncomfortable for very short and tall persons. ATVs are suitable for people with back problems since they have a slicker suspension.

When you are uncomfortable with something, you likely to avoid it; in our case, while you have comfort, you can go for long-distance and still enjoy your ride. The ATVs have it.

What about Racing? ATVs vs Dirt Bikes

The dirt bike is the “jet” in a race with an ATV. ATVs have bigger engines and heavyweight, but they cannot outdo dirt bikes, which have an enhanced power to weight ratio. Usually, dirt bikes accelerate faster than ATVs, therefore, being speedy.

Similarly, dirt bikes are very swift to turn any sharp corners and smaller trails. In such a case, a dirt bike will outshine an ATV in a race. Also, a dirt bike is faster than ATV, even on a straight road.

While riding on a dirt bike, you can easily land on most terrains without falling. However, ATVs can easily roll after a landing. Moreover, racing using ATV requires excellent experience. Dirt bikes win.

Dirt Bike vs. ATVs : Which is Safer?

The safety issue between dirt bikes and ATVs is controversial. An ATV is more stable while driving on it compared to a dirt bike, which only rides on two wheels. However, it does not guarantee much of your safety.

You can easily fall from a dirt bike and still stand to continue with your race. Also, you are likely to get minor injuries which cannot restrict you from undertaking most of your daily routines. On the contrary, an ATV’s accident can be fatal. It rolls over in many instances, and the driver is prone to severe injuries on your body. In some cases, you could even be admitted to an ICU (intensive care unit). Besides, ATVs are bulky, and in case of a crash, it might injure anyone near it.

However, when you ride both of these machines with a lot of professionalism, you reduce the risk you could face. It entails wearing the right gear while riding. Also, while handling an ATV for a race, your expertise level should be at a top-level.

Dirt bikes are better since you are not likely to fall victim to deadly injuries similar to those caused by an ATV. Besides, when you are at a professional dirt biker, you can quickly mitigate crashes.

Dirt bikes cost less compared to ATVs. Several reasons justify why dirt bikes are less expensive. They include the following;

If you feel that your budget is very tight, a dirt bike will be a good selection for a ride.

A dirt bike weighs less compared to an ATV. A standards adult ATV weighs about 1000 pounds while a standard dirt bike is evaluated at 200 pounds. What a big difference. Why is an ATV that heavy?

Weight is a key while riding any of this machine. For instance, dirt bikes have less weight, which makes them suitable to ride on any terrain such as steep hills. ATV has a lot of weight that affects its power to go over a steep hill despite having a bigger engine. Besides, it can even roll back, causing severe injuries to a rider.

Imagine loading an ATV on a truck all alone. How much energy would you use? For how long would you do the task? You can easily load and offload dirt bikes for transportation. Besides, they occupy less space since they are not bulky. It is possible to load three standard dirt bikes on a truck while you can only load a single ATV.

Dirt bikes are more likely to crash than ATVs. Owning a dirt bike requires you to regularly practice all the relevant tricks to help you race better. Can you remember the number of small injuries you suffered as a child while training to ride a bicycle? It is similar to a dirt bike.

ATVs are more stable and easy to drive, but it does not mean that you are safe. The only difference is that you are not likely to experience regular crashes, but in case it happens, there is a possibility of fatal injuries.

Dirt Bike vs. ATVs : Which One is Easier to Learn?

As a beginner, learning is way easier on an ATV than on a dirt bike. Here are a few reasons why the best for learners:

An ATV is more stable than a dirt bike since it operates on four wheels, and you can hardly fall. A learner on a dirt bike has higher chances of crashing as he/she trains. Besides, while learning using an ATV, you experience less fear than on a dirt bike.

The clutching system of an ATV is much easier than a dirt bike, consisting of a clutch and throttle system. It might take longer to master a dirt bike’s clutching technique. Besides, some of the ATVs come with an automated transmission, which is easier to operate as a beginner.

You easily learn how to control an ATV on off-road terrains, unlike on a dirt bike.
Having the knowledge and skills of driving an ATV will give you confidence as you progress to learn how to ride dirt bikes.

ATVs are more functional compared to dirt bikes. An ATV can handle a wide range of activities on most terrains such as farming, camping, pulling other machines, or other ATVs stuck on a trail. It is due to these functionalities of an ATV that makes it quite essential for those in rural areas. Besides, its power is plus for tough tasks.

On the other side, dirt bikes are designed for recreational purposes. You can only carry a few things in a backpack as you enjoy the speed of your bike.

So Which Should You Pick?

Choosing between a dirt bike and an ATV will depend on what you want with it. If you need to enjoy and have a good time in the woods or the mountains, then you should probably go for dirt bikes.

Also, for anyone with a goal of professional racing a dirt bike is the one. On the other hand of your desire is to have a more functional machine, then an ATV will be the best choice.